Written by Rajshree Roy Chowdhury Published on May 20, 2020 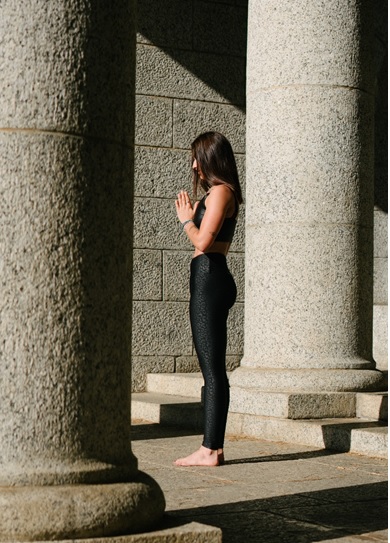 “Sun salutation can energise and warm you,

even on the darkest, coldestwinter day..”

Everyone enjoys watching the sunrise, the calmness in the surrounding with a hint of chillness that follows, and then as you see the sun rising from the horizon with all beautiful colours around it, it makes you realize the beauty of the sun.

Surya namaskar has a way for you to embrace that beauty and the feeling that you get while watching the sunrise.

However, we first need to know Surya namaskar properly and its steps and benefits to understand it better.

The significance of Surya namaskar in the world of yoga is quite daunting. Surya namaskar is one of the practices in yoga, a form of yoga that comprises of 12 graceful asanas/ poses.

Its ability to affect our health and mind has caught the eyes of many people worldwide. Surya namaskar is a form of paying gratitude to the almighty sun.

Apart from being an excellent form of intense workout, Surya namaskar also has much other significant contribution towards one’s health, mind, and the easiest way of balancing them righteously. It has the power to affect you spiritually as well as physically.

In this article, we will decode various aspects of Surya Namaskar from the exact Surya namaskar to all the benefits it has in store for us.

We will be going through Surya namaskar their steps and benefits in detail.

So, let’s start with a brief introduction of

WHAT IS SURYA NAMASKAR?

In the Sanskrit literature, the word “Surya” refers to the sun whereas the word “namaskar” simply means “salutation“. Thus when translated in simple terms (English), it is also referred to as sun-salutation. Traditionally it is a form of yoga, which consists of 12 poses along with few mantras. Although the practice has been in this world for a long time and there are variations to the exercise, but the fundamental nature and purpose of Surya namaskar remains the same.

It is ideally done during the morning, which makes sense cause it is all about greeting the sun and aligning yourself with the movements of the sun itself. Thus, it is suggested to be followed during the daytime, although there are no hard and fast rules. However, the entire purpose of Surya namaskar becomes null and void if it is followed sometime else in the absence of the sun.

The whole concept of Surya namaskar revolves around maintaining one’s connection between the body and mind through a sequential flow of energy via the asanas. There were sayings about the asanas to be essential to activate the so-called “Manipura Chakra,” otherwise known as the navel area, also referred to as the second brain of our body; these were more profoundly claimed by the ancient philosopher, hermits, and yogis.

The postures in the Surya asana do not only increase ones flexibility in the body but also helps to channel the energy within us to achieve something more significant such as internal and spiritual knowledge. There are certain health benefits that one gets along the way, which will be mentioned in the article below. The steps and benefits of surya namaskar will be in detailed form ahead in the article

Historically the importance of the sun is quite vast. The sun has always been a symbol of greatness and power. In earlier days, many Hindu and few other religions worshiped the sun as a deity, idolized as the god that has no discrimination of any kind.

The power of the sun to create and destroy life made it all sacred and worship-worthy. It was considered the existence of the solar system, and the earth’s life is due to the sun’s power and light.

In fact the Hindu Vedas defines and denotes Surya as a god who can execute all the darkness, evil and diseases,. Hindu mythology seeks significantly of the sun holding the centric position. This culture of faith and worship for Surya/sun made people gain the power to devour themselves to the sun’s greatness.

The originality of the Surya namaskar is quite contradicting in today’s world. It is a bit blurred to the scholars as few people believe its origin to be during the pre –Vedic and Vedic periods, which is at least about 2500 years ago, where it was performed as rituals with chanting of mantras and provide an offering to the sun with water and food. Whereas the modern techniques are more from the Raja of Aundh[1]

Sun is the primary source of light and life on earth. Its power to create life has been a boon to us; for the Hindus, the sun’s energy and its existence made them worship them in the form of yoga, where they would greet the sun and thank him for his divinity.

The ancient yogis and hermits had their way to do the same for other natural embody such as rives, mountains, planets, and even the moon.

The practices of Surya Namaskar have evolved throughout generations and years, as a result of which different variations have developed. So let’s dive into surya namaskar steps and benefits.

Traditionally the poses that make up the Surya Namaskar are:

After Step 8 all we do is go in the reverse order starting from step 4 to step 1 once again; thus the steps follow as

Any form of yoga would help you get back in shape and increase the flexibility of your body.

The body undergoes so much of bending and stretching in the process of Surya namaskar that the joints and muscles get all toned up and flexible.

If you are into losing some pounds without actually getting involved in vigorous routines, then Surya Namaskar will help, you find a way to your weight loss goal.

The cardiovascular system of your body works out during the entire yoga process of Surya namaskar, thereby increasing blood circulation and heat production, which indirectly helps us to lose weight.

BENEFITS OF SURYA NAMASKAR FOR HEALTHY SKIN AND HAIR

As mentioned earlier, the blood circulation in your body starts to increase, which helps in the generation of new cells and healthy inflow of positive energy in your body.

This helps in maintain the glowy skin and hair. The blood circulation helps in preventing wrinkles on your face, neck, and keeps your hair and skin radiant as ever.

The continuous flow of controlled air helps to generate a healthy influx and outflux of air in the lungs, thus maintaining the oxygen in the blood. Thereby more oxygen is transported throughout even in the heart, getting rid of other toxic elements on the way[2]

Description : Involving kids to do surya namaskar can help in increasing their concentration .

The asanas used in the Surya namaskar make you maintain a balance in your body and align your body with your mind. Thus helps to increase one’s awareness and concentration.

These practices are said to be followed by the students. Surya namaskar for students helps in concentrating on their work[3].

As Surya Namaskar has an effect on the brain as well as blood circulation, there are certain positive mood enhancement chemicals that our body can produce. These molecules are produced at a higher rate when asanas are done regularly.

BENEFITS OF SURYA NAMASKAR FOR WOMEN

In general, women can benefit in many ways, apart from getting rid of dull skin and hair; there are certain vital benefits that women can achieve with the help of Surya namaskar [4]. Stating out few of them:

Surya Namaskar, in general, helps to fight the anxiety within us, there are other benefits of yoga that one can benefit due to the asanas practiced like: getting rid of Insomnia, and toxins in our body.

Despite all the benefits stated above, there are few disadvantages of Surya Namaskar or rather downfalls in particular cases like:

TIPS FOR THE BEGINNERS (Surya Namaskar for beginners)

Since many of you might be new to yoga in general, there are specific points that you have to keep in mind if you want to successfully complete the entire process of Surya namaskar regularly.

The power of breathing

Thus if you find the process difficult to follow and do not know the breathing techniques, then kindly get some help from the experts.

Even though it is not advisable to break the cycle and the flow of energy of the Surya asanas, but if you fell if too much tricky, start by a slow process, and then once you get comfortable to continue in a normal flow.

Surya namaskar is considered to be one of the primary and essential practices of yoga, and its significance in the world of yoga is commendable. Thus, they are advised to be followed by everyone as it hardly takes time to perform it. In your busy schedule, if you want to stay mentally and physically fit, you can surely try Surya namaskar, it will generate the flow of energy within you that you might be lacking.

The key elements to unlock the benefits of Surya namaskar are concentration, focus, determination, and consistency. With all these, you can easily adhere to the benefits that Surya Namaskar has in hold for you.  This article was a portrait in a way to seek out the curious people out there; it should not be taken as professional advice.

How many Surya namaskar should I do?

It totally depends on what level you are of the practice: you are a beginner and have not done any physical activity lately, and then you might take it slow and do the cycle 4-6 times each comprises of 12 poses.

And if you want to avail of the full benefits of the Surya Namaskar, then you need to do at least 10 styles of it. However, slowly build up the pace.

How long will it take to see the difference?

It differs from person to person. If you do it regularly, you can see the difference in your mind as well as your physical status in just a week; that is if you follow it religiously and dedicatedly.

When is the best time to do Surya namaskar?

The name itself defines the question; it is advisable to do it early morning or during sunset, in an empty stomach. The entire idea of Surya namaskar is not only the physical exercise but also surrendering yourself to the sun, the sun is known as the light and life-giver. Thus, it has a spiritual aspect to it as well.

However, if you find it difficult for you to find time in the morning, you can do any other time of the day but on an empty stomach.