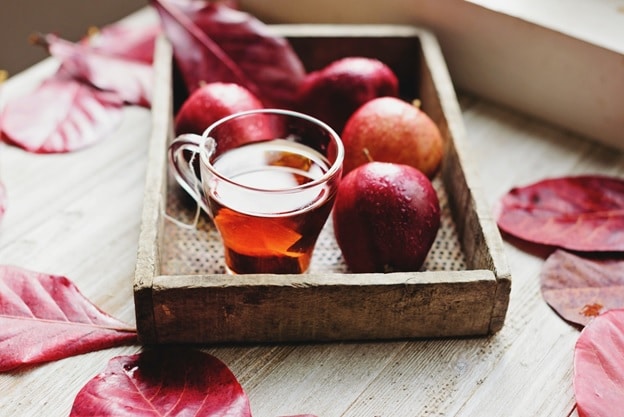 “You need to include foods in your diet that are as close to natural as possible. If    something has a whole list of ingredients that you cannot pronounce, it should not make it into your shopping cart.”

The marketing and production of apple cider vinegar, as well as its demand, has been elevating in our community as we talk about it. With so many health claims that apple cider vinegar provides, it has caught most of our interest.

Weight loss, in general, has been a significant health issue that most of us face, and if taking or incorporating natural products for treating the same can be an option then wouldn’t you take it? Of Course, you would, the component of apple cider vinegar, acetic acid is said to have the potential to help us lose fat to some extent.

Having said so, there have been very little trails and research on human beings directly so that nothing can be said with surely.

To begin with, the basics of it lets first see:

WHAT IS APPLE CIDER VINEGAR

Apple cider vinegar (ACV) in simple words is a kind of vinegar made from apples, and it is made mainly using the fermentation process, which is primarily rotting the apples to make vinegar out of it.

The entire process of vinegar making involves two significant steps of fermentation in one the apple sugar are converted to alcohol and is further followed by the second fermentation where the alcohol is converted to acetic acid.

In apple cider vinegar there are about 5-6% of acetic acid. There are other elements along with it, such as Vitamins, minerals, organic acids, etc.

HOW DOES APPLE CIDER VINEGAR HELP IN WEIGHT LOSS?

Most of us try to maintain a reasonable calorie intake and measuring or keeping an idea as to what is allowed to be eaten especially during dieting makes a massive difference in our body.

Thus a low-calorie drink that helps to boost up our metabolism and does not cause any extra weight gain itself is one of the most beneficial factors for weight loss.

The “mother” of apple cider vinegar is said to contain certain extra beneficial elements such as enzymes and microorganisms in it.

These microorganisms are highly beneficial in improving our gut bacteria population as well as helps in digestion as well, thus are also known as probiotic bacteria.

The presence of probiotic bacteria helps to absorb our nutrients and also to digest food faster and efficiently.

Apple cider vinegar has the potential to make us feel fuller and thus indirectly prevents us from overeating.

It mainly helps to suppress appetite, studies have stated that acetic acid in vinegar controls our brain activity indirectly; thus the brain controls our intake of food and thus leading to maintaining weight or avoiding extra food accumulation[1].

APPLE CIDER VINEGAR HELPS TO INCREASE THE METABOLISM OF THE BODY

Apple cider vinegar for weight loss can be related to the metabolic factor of our body and acetic acid helps to maintain the pH of our stomach and activates more enzymes in the stomach as being an acid itself promotes better digestion and metabolism.

Studies have reported that acetic acid helps to boost up the fat burning process and prevents fat storage and sugar production in the liver.[2]

Daily intake of apple cider vinegar has shown some positive activity of the vinegar in your body. Acetic acid is said to have shown to suppress fat accumulation in rat and animal trails.

Researchers have conducted studies on rats and treating apple cider vinegar showed the protective potential of acetic acid from gaining weight. It is said that the acid helps to improve the expression of the genes that are responsible for reducing fat storage and thus avoiding fat accumulation.[3]

By improving the functionality of the liver to uptake more sugar from the blood, thus maintaining the optimal level in blood, thus apple cider vinegar for weight loss is so much in demand.

WHAT SCIENCE HAS TO SAY ABOUT APPLE CIDER FOR WEIGHT LOSS

There are racing thoughts and sayings about how apple cider helps to lose weight, but proper scientific reasons and studies are critical to back up the claims that apple cider vinegar has made.

Thus let’s go through a few of the studies that researchers have conducted to known if at all the rumors regarding apple cider vinegar for weight loss is true or not.

Although there are studies on apple cider vinegar and its effect on weight loss, it’s essential to notice that the studies are limited and with less number of participants, thus more research has to be done regarding the same before fully conforming or approving the method.

Apple cider vinegar for weight loss is just one of the major benefits of it, there are far many benefits that you can explore along with it, few of the significant ones are:

Apple cider vinegar for weight loss can be used in many ways; few well-known forms and ingredients will help to help you lose weight.

Since it is a concentrated form, it is always suggested to dilute it and then drink it for benefits without any side effects, ways to drink apple cider vinegar:

Using as salad dressing – Use of apple cider vinegar as olive oil for salad or vegetable dressing is also one way to incorporate apple cider in your diet.

How to consume apple cider vinegar for weight loss

Now that you are quite well versed with apple cider vinegar for weight loss, its essential to understand that this article is solely for the purpose to educate you or give you a brief idea about it and should not be taken as a piece of medical advice, it’s always suggested to consult a doctor for the purpose of safety.

A moderate and conscious amount of apple cider intake would help to promote weight loss and as you now know that it not only helps with weight loss but also will give you other benefits that come along with it. And although the amount of study done on this might be less, it is the beginning of something great, and I feel it’s worth trying with keeping in mind all the precautions in order to avoid the side effects.

How much apple cider should I drink for weight loss?

How effective is apple cider for weight loss?

It isn’t a miracle compound as it’s a natural product t might take some time to show some visible results. Most importantly it aids the process of weight loss thus it’s not a substitute for exercise or diet, along with the consumption of apple cider one has to maintain proper diet and also do some physical activity.

What are the side effects of apple cider vinegar?

There are few harmful side effects of apple cider vinegar it is not consumed at proper precautions with proper dosage. Side effects such as throat irritation, weakening of enamel, tooth pain, heart burn, etc. are few of the examples.

When should I drink apple cider vinegar?