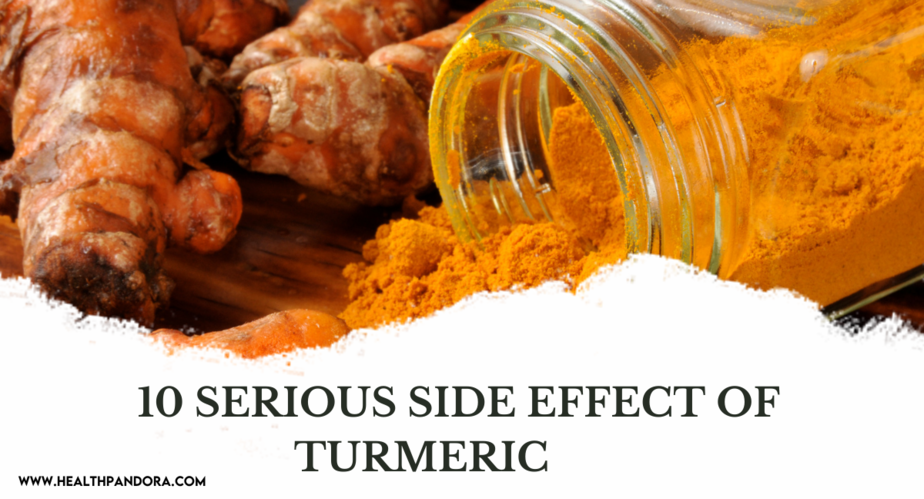 Turmeric has long been known for its beneficial effects on our body, but today we shall see the full 10 serious side effects of turmeric.

Turmeric is known to be one of these spices that has various roles in our body, and no wonder why it’s so well known, its therapeutic effects on our body is way ahead of our thoughts. Still, too much of anything isn’t suitable for anyone, thus understanding the top 10 serious side effects of turmeric will help us unrevealed a different side of turmeric.

Turmeric is extracted from turmeric plant which is essential in certain parts of the world; they are widely grown and used in the Asian food. The use of turmeric is not limited to food but also has seen its light on the medical field.

The spice is very often used for treating cold, pain, inflammation, and many other diseases. It affects our brain and heart are well talked about, but more studies are needed to be done for the same.

With the known and the unknown thoughts about turmeric let’s see what the adverse side effects of turmeric are. Asians in particular Indian have thought of using turmeric in most of their Ayurveda treatments and also many a time for their skincare routine; thus, the proper use of turmeric is significant.

Knowing what the side effects of turmeric are will help you consume or use it in a safe manner and will give you insights of its proper use.

Below is a roadmap as to how we would be proceeding in this article.

So in order for us to understand how turmeric can have side effects on our body, it’s essential to know what turmeric is and its origin, thus starting with a brief introduction on.

Turmeric also well known as curcumin, Curcuma, Indian saffron, etc. are well recognized for its benefits and medical property. It is a type of yellow spice that are collected from a rhizomatous herbaceous plant called Curcuma longa.

The turmeric has a typical flavour and colour. The colour is a bright yellow or orange-ish, and its taste is a bit bitter and peppery. Turmeric (curcumin) mainly consist of carbs, fiber and starch as the nutritional elements.

The turmeric contains a lot of active chemical ingredients that are highly investigated for its properties, one of the essential components of turmeric being diferuloylmethane which is a kind of polyphenol[1].

The use of turmeric (curcumin) in the traditional history of the Asian culture is quite colorful and is thus caught the attention of many researchers. Its properties include anti-inflammatory actions, anti-cancerous actions, anti-microbial element, and antioxidant agent.

In today’s day, the uses and benefits of turmeric is known worldwide, but one of the essential factors that should come across is if it’s that safe to use or to be injected? Thus we bring to you this article that says about the side effects of turmeric.

One of the most studied element of turmeric being curcuminoid, which takes about 3% of the whole turmeric [2].

Before we get to know about the 10 serious side effects of turmeric, it’s also equally important to understand what the properties of the turmeric (curcumin) are. This will help us understand how it works and how it affects our body.

Thus to know what are the adverse side effects of turmeric, we need to first concentrate on the ways turmeric affects our system.

I have given quite a few properties of turmeric above and am going to elaborate on the same as of now.

10 serious side effects of turmeric

Turmeric are used for various wound healing processes, but the injection of turmeric on a high dosage can affect the blood clotting factor.

There are a specific requirement of this blood-thinning activity of turmeric that might be needed in medical treatment for people who are suffering from clotting problem like heart problems.

But if people who are not suffering from such disease tend to have turmeric if can effects negatively on our body, turmeric is said to have anti-coagulant activities that slow down the blood clotting and can lead to bleeding disorders[6].

So if you are dealing with iron deficiency and taking turmeric on a high dose, it might lead to some serious problem. This condition or property of turmeric of binding to the Iron are called as an anti-neoplastic effect.

Thus studies have shown that the use of turmeric can cause anemia in a person, as turmeric tends to bind to the Iron in our gut and affects the iron metabolic pathway[7].

It is said that turmeric can absorb around 20-90% of the turmeric from a humans body [8].

But excessive use of the same can lower down one’s sugar level to an extreme level, especially if one is diabetic. Thus people who are already under the treatment of diabetic medicines should be careful with the use of turmeric in their diet.

Well ever wondered “is turmeric bad for kidneys”?? Well, in some context, yes. There are high chances of developing kidney stone if unwanted intake of turmeric is consumed.

Turmeric is said to increase the risk of getting kidney stone due to an element present in the turmeric plant known as oxalates. It is said that these oxalates can bind to calcium in our body and convert it into calcium oxalate, which in turn is the leading cause of kidney stone [9].

Apart from the severe health issues that one might get upon the use of turmeric, there are allergic problems that few of us have to deal with it.

Turmeric can be allergic to few of us and thus should be well tested before its heavy usage, allergic reactions to turmeric cause shortness of breath, rashes and stomach problems.

Turmeric tea or turmeric, in general, can give you some severe stomach ache and ingestion problem, if taken in heavy dosage.

Turmeric benefits include good digestion of food, and turmeric are said to ease up one digestion. Still, there have been studies that say how turmeric can increase the production of gastric acid in our stomach, which generally helps in digestion of food.

The high production of these acids can lead to stomach problems and causes nausea-like symptoms.

In one hand the use of turmeric help indigestion, but one has to remember to take the right dosage of the same to avoid any adverse effect on our body. These stomach disorders are medically termed as Gastroesophageal reflux disease (GERD).

Turmeric might have some interactive properties with certain medications; thus, the use of turmeric in higher doses are to be monitored and most importantly should be asked by a professional doctor.

There are certain medicines which are related to liver, diabetes, blood clotting that are directly affected by the use of turmeric.

Drugs such as Sulfasalazine, Tacrolimus, Talinolol, Docetaxel and many others have shown to be somehow affected by the use of turmeric. It is thus always suggested to take some medical advice before the introduction of any foreign things in your body even if it is natural remedies.

Some studies have shown how the use of turmeric can be beneficial for pregnant women as well as there are studies that contradict the same.

The safe intake of turmeric for pregnant women can be different for an individual and thus are to be communicated by the concerned doctor.

Although the information on the effect of turmeric on the uterus and for pregnant women, in general, is less, it’s better to be informed.

Along with nausea, there are other side effects of turmeric in our body; sickness can sometimes lead to headache as well.

Turmeric benefits are right to be known, and some even say how it helps with our hormonal balance, but did you know that the main ingredient of turmeric the curcumin is nearly known to be having the properties of one of the hormones in our body called as estrogen.

Turmeric has been studied for this role of its activities as the hormone estrogen by researches. Still, it has a contradicting statement about it in general; it is said to be effecting the hormone-sensitive condition in our body.

The hormone-sensitive condition can be in the adverse effect as well as positive. Researchers say that this hormone sensitivity can affect the cancer cells somehow.

Other potential side effects

Even though the National Center for Complementary and Integrative Health (NCCIH) says that the use of turmeric either orally or topically is considered as safe, consuming it in a high dose for an extended period may cause one of these side effects that we did talk about today.

Turmeric is also well recognized by the Food and Drug Administration as a safe food product to be consumed with the right amount of dosage into consideration.

Turmeric as a safe consumable product, having said so, many studies have mainly worked on how much of the intake of turmeric is essential and safe.

The WHO committee who works on Food Additives says that the daily intake of curcumin is said to be 1.4 mg/pound of body weight of an adult[11].

These dosage amounts vary from person to person based on their health conditions and most of the supplements of curcumins and suggested to be kept away from children.

In fact, some reviews were issued by Journals saying how certain groups of people who are taking anti-depressants, anti-biotics, anti-coagulant, chemotherapy treatments should be taking curcumin with caution, also pregnant and breastfeeding women should consult with a doctor about the dosage.

Although the spice Turmeric has great songs about its enhancing flavors and its health benefits, it should be taken with the right informed purpose and with caution.

This article was mainly to enlighten you and make you aware of the 10 serious side effects of turmeric so that you can take an informed decision.

There are various beneficial effected and uses of turmeric as well, which will be discussed soon enough, but to know the side effects are much more critical because we quite often ignore the opposing sides of anything.

Thus taking the informed decision makes all the difference. Still, one has to keep in mind that the side effects that we did talk about are only once you intake curcumin in a high dosage that too for an extended period, thus in normal circumstances his will not be the scenario and turmeric will enhance your health.